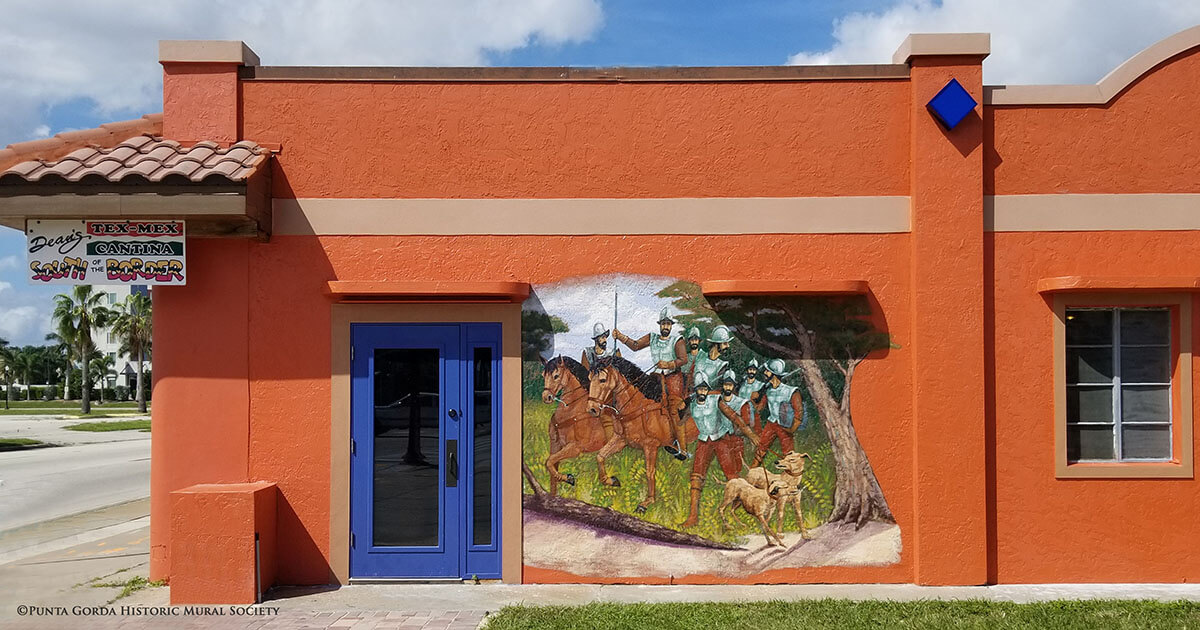 Dean’s South Of The Border

This three panel mural depicts the Spanish conquistadors who founded and colonized the Charlotte Harbor area.

The first panel of this mural shows Hernando de Soto who was born in 1500 to a respectable family in Spain. As a young man he sailed to Panama and there he learned how to sail. He soon became known as the “child of the sun” because of his dawn raids on unsuspecting villages. His trademark was vicious dogs, fast horses and extortion. Spectacular brutality earned DeSoto large Inca ransoms. He became one of the richest men in the world before leaving Peru in 1536. DeSoto returned to Spain and was appointed Governor of Cuba and given a 4 year commission to colonize and hold La Florida. DeSoto landed in Charlotte Harbor, Florida on June 1, 1539.

The second panel is of Ponce de Leon. He was born in 1460 in San Teruas de Campos, Spain. In 1493 he sailed with Columbus on his second voyage to the Americas and setup residence in the Caribbean and eventually became Governor of Puerto Rico.

In 1513, he received permission to explore islands to the NW of Puerto Rico and sailed on March 3, 1513 with 3 ships and 200 men. It is believed that he stepped ashore a Ormond By the Sea and hopscotched his way around the bottom of Florida, eventually ending up in Pine Island Sound. He named his discovery La Florida.

The third panel depicts the landing of de Soto’s men on what is believed to be Live Oak Point on the north side of Charlotte Harbor. Here they started their long march inland hunting for gold and slaves.