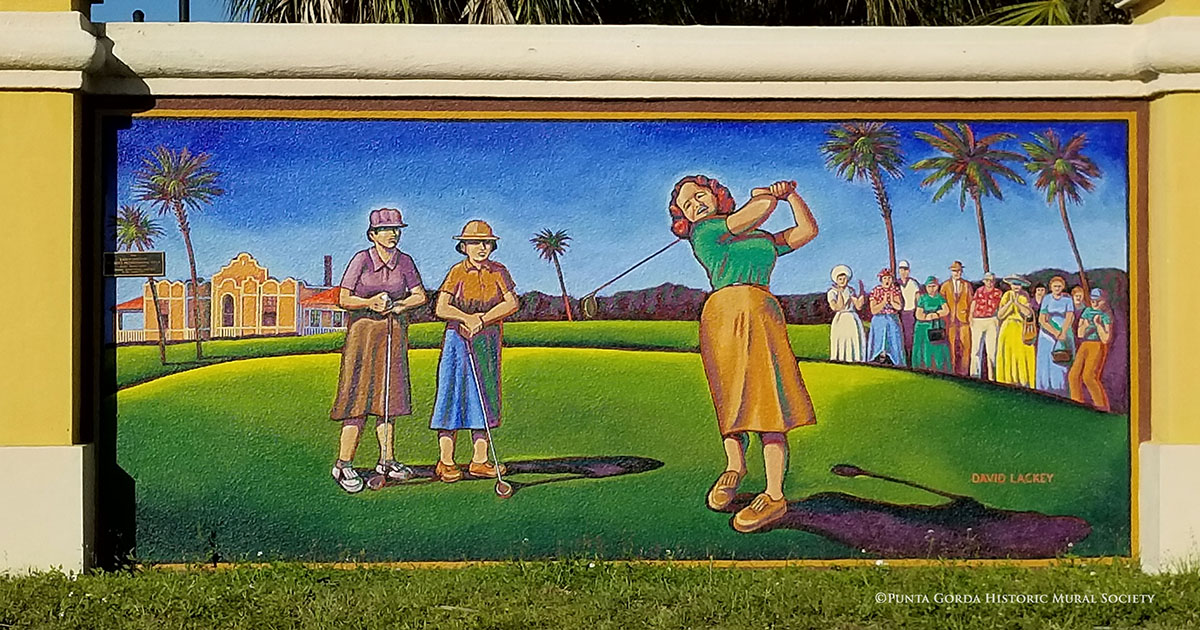 Following the transformation in the mid-1920s of the Hotel Charlotte Harbor by Barron Collier and his investment group, Collier also purchased the old Punta Gorda Country Club 9-hole golf course east of town (originally built in 1919) and expanded it to 18 holes, remodeled the Club House and made it part of the hotel complex offering golf to its guests.

Collier promoted his new enterprise by giving complimentary luxurious accommodations to established golfers of the day to participate in exhibition matches. These promotions attracted the influential and well-heeled from around the world.

Thus is the setting of this mural. It depicts an exhibition match of exceptional women golfers of the day; Patty Berg, Louise Suggs and Betsy Rawls.

Patty Berg, nicknamed “Dynamite”, is seen here teeing-off. She was one of the most dominant women golfers during her nearly three decades of play. She had 60 official LPGA tournament wins, and to this day she is credited with more majors than any other lady golfer. Because of her play and leadership she was a member of the first class to be inducted into the World Golf Hall of Fame in 1974. She was a strong advocate for cancer research having been a cancer survivor herself. The Patty Berg Cancer Center was established and dedicated in her honor in 1993 at Southwest Florida Regional Medical Center.

Louise Suggs was a media darling and was nicknamed “The Little Ben Hogan,” because of her competitive spirit and persistence. Bob Hope called her Louise “Slugs.” He gave her that tag while watching the star-struck Louise tee-off at an exhibition he and Bing Crosby were hosting. As she described it “…I was first to hit and caught a drive right on the screws sending it 250 yards. Bob jumped up and exclaimed “Wow”. Bing asked Bob where he was going. He replied “I’m going to get a skirt! Where do you think?””.

Betsy Rawls in contrast to her peers didn’t start learning the game until she was 17. She learned quickly and finished her career with 55 LPGA event wins. When she wasn’t playing on tour she and Patti Berg traveled the county by car as representatives of Wilson Sporting Goods conducting up to 120 golf clinics a year.

Combined this group holds an official 173 LPGA victories, not including their many of years of amateur matches. Patty Berg and Louise Suggs were 2 of the 13 founders of the LPGA in 1950.