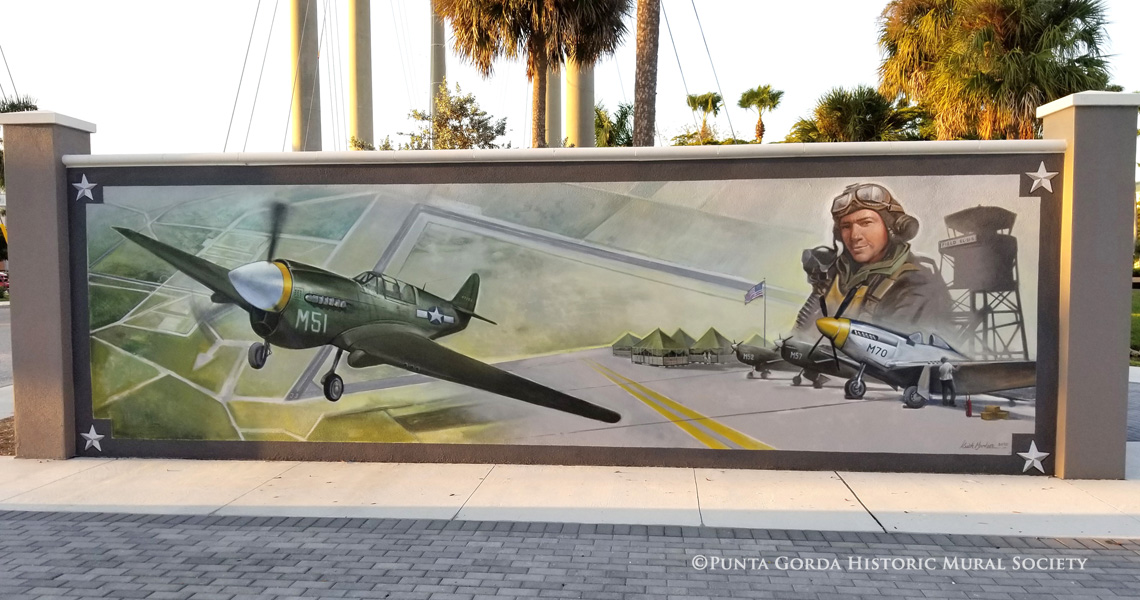 The Punta Gorda Airport was built by the US Army Air Corp as a facility to train pilots for WWII. The Army installed 44 air fields across Florida for pilot training and the Punta Gorda air field was the last one built. Land acquisition by the County was completed in January 1943 and totaled 1720 acres.

Three 5,000 foot runways were completed by July 1943 and the rest of the base buildout was finally completed by early December. It consisted of a total of 61 buildings, 6.5 miles of roadways, 5,935 linear feet of taxiways (50’ wide) and a 49,000 square yard concrete apron.

268 Hutments were constructed for living space for the enlisted men, totaling 91,952 square feet and the area was referred to as “Tent City”. Officers lived off base, renting from locals.

Build up on the base began with the arrival of the 502nd Fighter Bomber Squadron on December 3rd. By February 1944, the Army Air Corp had assigned 1,097 enlisted men and 44 officers to the base. At that time, 103 aircraft were on the field including 77 Curtiss P-40 Warhawks which were the main training plane on the base. Each pilot trained for 15 weeks, before being sent overseas.

In the mural the P-40 Warhawk is shown flying out of the field on the left. A P-51 Mustang is shown on the tarmac next to other Warhawk trainers. The P-51’s arrived as trainers to the base in June 1945 even though they were used extensively in the war effort long before then. There weren’t enough manufactured to be used as trainers until then.

The Punta Gorda Army Air Field was officially deactivated on September 1, 1945. The base was active a total of 1 year, 8 months and 22 days and trained an estimated 750 US pilots.

It was deeded to Charlotte County by the War Assets Administration and has been an active airport ever since. This is the history that our artist, Keith Goodson is capturing in this our 31st mural.

A mural depicting this history was originally painted in 2002 by artist Edwin Yip. It was located at the Charlotte County Airport (now called Punta Gorda Airport) but was destroyed by Hurricane Charley in 2004.