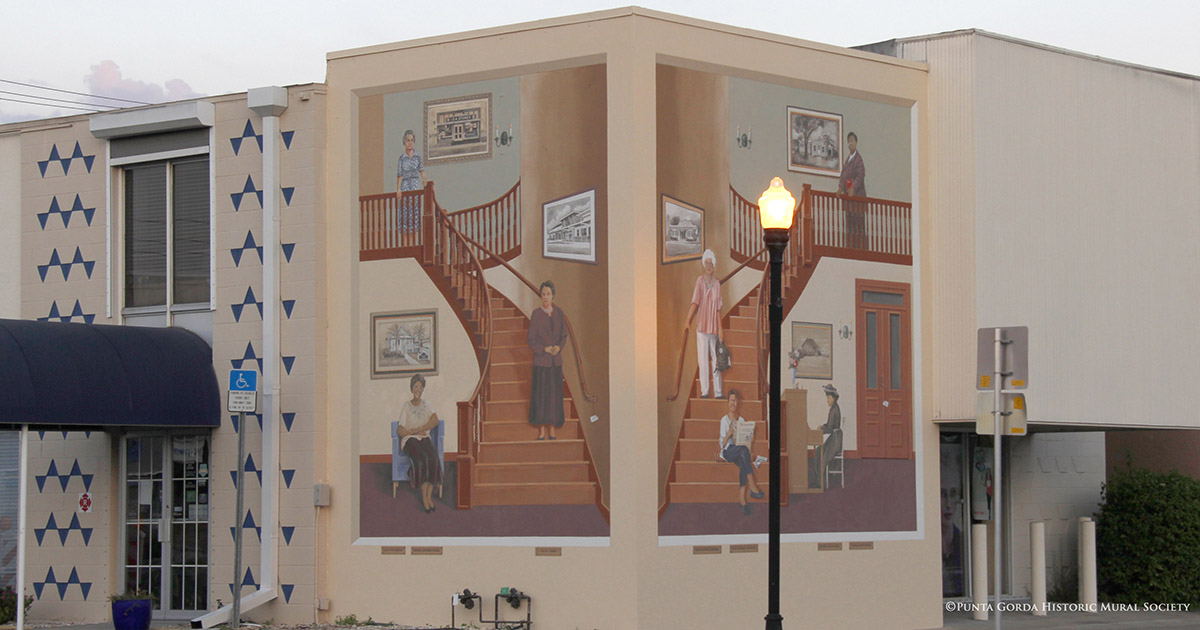 This mural presents seven women who represent our history, ranging from the early years to more recent times, and whose contributions cross a wide range of areas – education, business, history, healthcare, government, and social causes. Each made a lasting impression on our community.

Lois Cole Peeples (1907-1994) – Local business woman during the Great Depression and WWII and later a community volunteer, mentor and leader. She was twice president of the Punta Gorda Woman’s Club, and president of the Business and Professional Women’s Club and the Charlotte County Democratic Women’s Club. She was the first woman inducted into the Rotary Club. Pictured above her is the IGA Store she and her husband Vasco owned in town.

Sallie Jones (1895-1960) – First female superintendent of schools in the State of Florida. She was elected superintendent of Charlotte County Public Schools in 1937 and served with distinction for 16 years. She introduced the first school lunchrooms and set the standard that all teachers had to be professionally certified. Retired in 1953 after 31 years as an educator. The Punta Gorda elementary school named after her is pictured above her.

Bernice Andrews Russell (1923-1999) – Humanitarian, social activist, historian, visionary, and founder of the Blanchard House Museum. She served on the Punta Gorda Housing Authority for 22 years and worked to expand affordable housing for those in need. She purchased the Blanchard House at a bank sale in 1997, setting the stage for the museum that finally opened in 2004. It is featured in the picture above her.

Cornelia West Ponder (1874-1934) – Having received medical training prior to moving to Punta Gorda, she was a mid-wife and assistant to local physicians from 1910-1934. She willingly offered medical as well as home care assistance to those in need in the community, both black and white. She was very religious and depended on God to help her do her work. The picture next to her captures what is believed to be her home on Scott street and is typical of the type of houses from her time.

Helen Cornish Wrobbel (1918-2014) – Restaurant owner in the 1960s who was in the vanguard of civil rights for all people and also an active community volunteer. She was an active member of the Historical Society and Punta Gorda Woman’s Club and instrumental in preserving several historic buildings in Punta Gorda. She was a volunteer firefighter, and worked for the establishment of a paid Charlotte County fire department. The picture above her features the Woman’s Club building.

Tosie Quednau Hindman (1923-2009) – Elected as Supervisor of Elections for Charlotte County in 1965. She was adamant that residents should vote. For nearly a quarter century she was known as the Queen of the Court. With help from her staff, she organized and ran every political contest in Charlotte County. She was locally famous for her election night tradition of sitting on the courthouse steps reading election results for the press. The old Charlotte County courthouse is featured on her newspaper.

Virginia Taylor Trabue (1834-1924) – Highly educated wife of Punta Gorda founder Isaac Trabue. She stood nose to nose with Isaac and worked alongside him in his businesses. She was an active Episcopalian and it was at her behest that a mission was established in Punta Gorda and later named the Church of the Good Shepherd. She believed in women’s rights and she herself was strong, independent, very much her own person, and truly a woman ahead of her time. The Lanier cabin which was the Trabue’s original home in town is featured in the picture above her head.