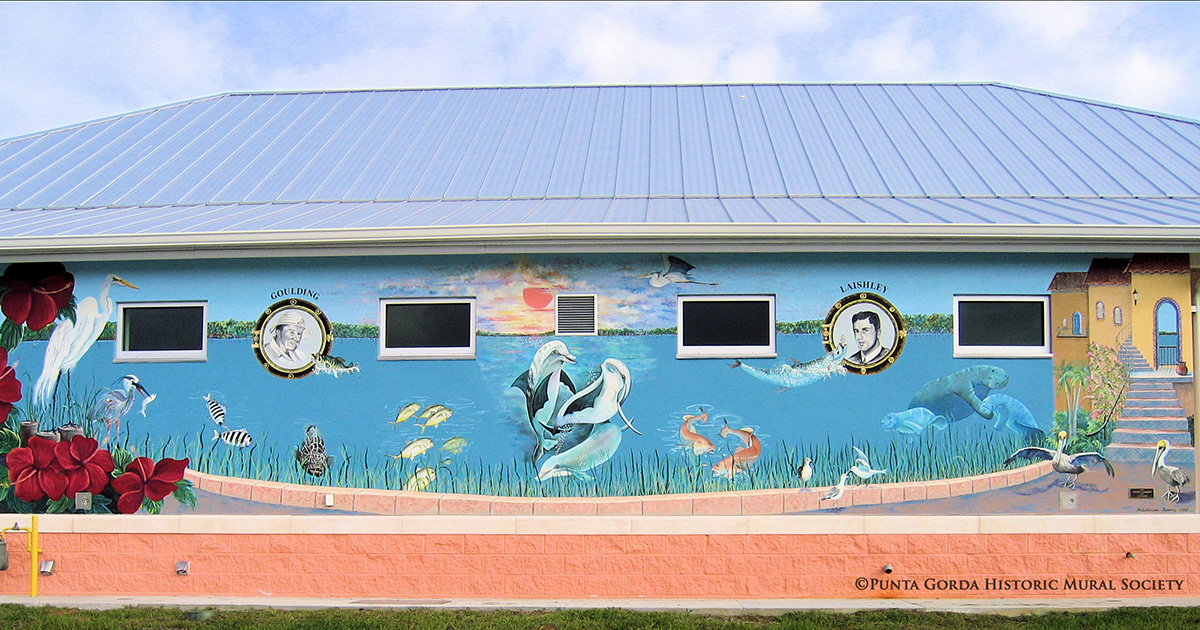 This mural captures the importance of working in harmony with the environment and highlights two individuals who made significant contributes to this area.

Back in 1926, the City of Punta Gorda officially became the City of Hibiscus and in conjunction with the proclamation, 2,200 red hibiscus were ordered and planted throughout the city. It must have made an impression on young Pete, and the story goes that in the early 1930s, he travelled throughout the state, gathering samples of the 12 hibiscus varieties growing in Florida. From that stock, he developed almost 500 registered varieties in his backyard on Retta Esplanade.

Goulding did this by cross breeding and utilizing special pollination techniques that he developed. He figured that during his 60 years, he produced more than 60,000 hibiscus plants – growing over 2000 seedlings every year. He was one of the most knowledgeable hybridizers in the world. He died in 1992 at the age of 83. The big red hibiscus in this mural is a tribute to Goulding’s “lipstick red” hibiscus.

The person on the right is Phillip Laishley. Laishley moved to Punta Gorda in 1951, and after many businesses in and around Punta Gorda, he ran for City Council becoming Mayor in 1968. He was on Council for 12 years and served as Mayor for 6 of them.

He was very involved in making Punta Gorda a better place to live, being passionate about building better parks for the town. In 1975, he pursued state grant funding to purchase the old municipal trailer park property to build a large park for all to enjoy. Unfortunately, he never got to see this take place. On July 5, 1975, he was in a car crash and died. A month or so later, the grant was approved and the land was purchased to become a new City Park. The park was named after Phillip Laishley who worked tirelessly to ensure that Punta Gorda became a waterfront community with a city yacht basin.

The original Nature’s Harmony mural was completed in 1999 (dedicated on January 12, 2000) and depicted the harmony of nature, and the contributions of Goulding as well as J.C. Galloway who devoted his time as an environmentalist working with indigenous wildlife. The original mural was destroyed by Hurricane Charley on August 13, 2004.

In recreating this mural, the artist replaced Mr. Galloway with Phillip Laishley with the mural now being located in the park honoring him. The recreation of this mural was dedicated on May 17, 2007.